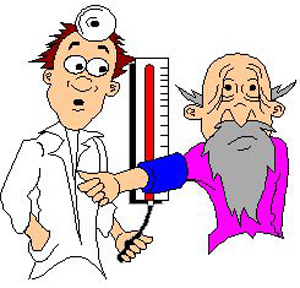 Back in June, 2008, this column took a look at hypertension—high blood pressure by another name. This week, we’ll examine some additional aspects of this condition, which can lead to coronary heart disease, heart failure, stroke, and kidney failure, among other health problems.

Yes, this is a big deal. According to the National Heart, Lung, and Blood Institute (NHLBI) around one in three American adults has hypertension, which is usually asymptomatic. Despite the lack of symptoms, though, your body can slowly be self-destructing. Thus, it is prudent to review the basics.

As with any physiological measurement, the values can vary during the day, and can be affected by stress, caffeine, smoking, physical exertion, time of day, the position your body is in when taking the measurement, and even by having a full bladder. If you have smoked or consumed a caffeinated beverage, allow at least a half hour before taking the reading.

For those tracking their blood pressure, it is wise to sit down, and rest for a few minutes before taking the reading. Ideally, daily readings should be performed and compared for the same time of day. It is good practice to occasionally take readings in the opposite arm.

Much has been written about improving diet and increasing your level of exercise as a way of preventing and alleviating hypertension, so we need not discuss it here, except for one point that is often ignored.

The conventional wisdom on caffeine is that it “temporarily” raises your blood pressure. True, but what if you drink coffee (or diet cola) all day? Aren’t you then continuously raising your blood pressure? Heavy caffeine users can often experience significant drops in blood pressure by giving up this popular stimulant. One method is to start the day with a caffeinated cup, and then forge ahead with decaf.

Diuretics lower pressure by eliminating excess fluid and salt, but care must be taken that potassium levels do not also drop. ACE inhibitors encourage the blood vessels to dilate, thus lowering pressure, and are relatively free from side effects. Calcium channel blockers also encourage dilation, with possible side effects of constipation, nausea, headache, and dizziness.

Beta blockers mediate the “fight or flight” response, and lower the heart rate, which reduces hypertension. Although they have a list of side effects, beta blockers have proven to be such powerful lifesavers that Sir James Black, who invented this class of drugs, was awarded the Nobel prize in medicine in 1988.

For the most part, these drugs are well-tolerated, but the patient needs to be monitored and the dosage watched carefully, since hypotension (excessively lowered blood pressure) is always a possibility.

A number of herbal therapies have been used for hypertension, including Hawthorn, Arjuna bark, Yarrow, and Garlic. Supplementation with Arginine has also shown promise.

One other herbal remedy is less well-publicized, but Michael Ruehle—president of Janzee, Inc.—is doing his best to change all that. Janzee markets a capsule form of the herb Hibiscus sabdariffa, which they call Rosellica®. Ruehle was first introduced to this herb in tea form when he saw it used in Jamaica as an anti-hypertensive.

As it happens, there are a number of small clinical trials confirming the efficacy of the herb. But Ruehle wants more data, and offers a discount to his customers if they submit their own blood pressure records. Rosellica® also contains additional ingredients, including substances to boost potassium levels.

Taking a page from the NHLBI numbers, Ruehle identifies his best prospects as the prehypertensives.

What’s the takeaway here? Although uncontrolled hypertension is a dangerous condition, given the wide availability of blood pressure measuring instruments and the variety of therapies, there is every indication that this beast can finally be put under control. Get your pressure checked as soon as you can!