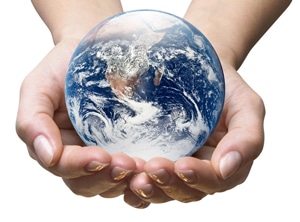 The title of this piece refers to a bumper sticker that began to appear just before the first Earth Day in 1970. According to the Earth Day Network, Senator Gaylord Nelson was inspired to do something about the environment, in the wake of the big Santa Barbara oil spill of 1969.

As to the “fad” aspect, the slogan reflected a worry—common at the time—that society would soon lose interest in improving the environment, and thus our species would pollute itself (along with many others) into extinction. But, one other way that the fad can manifest is by uncritical acceptance of the worst possible gloom and doom scenarios. That, in turn, leads to arrogant virtue signaling by those who wish to show how much more Green they are than you.

In certain cases, you can virtue signal to yourself—by doing Green acts to bump up your own self-image. Indeed, that was one of the points of John Tierney’s famous article from 1996 entitled “Recycling Is Garbage.”

“Americans have embraced recycling as a transcendental experience, an act of moral redemption. We’re not just reusing our garbage; we’re performing a rite of atonement for the sin of excess. Recycling teaches the themes that previous generations of schoolchildren learned from that Puritan classic, The Pilgrim’s Progress.”

Tierney also exposed other myths. We are not running out of landfill space, and plastics are not evil, compared to more natural materials:

“[L]ightweight plastic packaging requires much less energy to manufacture and transport than traditional alternatives like cardboard or paper. Food companies have switched to plastic packaging because they make money by using resources efficiently. A typical McDonald’s discards less than two ounces of garbage for each customer served—less than what’s generated by a typical meal at home.”

Tierney referenced archaeologist William Rathje, who excavated landfills and discovered that paper, cardboard, and other organic materials—while technically biodegradable—tend to remain intact in the airless confines of a landfill, and occupy much more landfill space than plastic. Twelve plastic grocery bags fit in the space occupied by one paper bag. And these days, virtually every grocery store has containers to collect plastic bags for recycling.

The bottom line is that recycling is good if it makes economic sense.

In 2015, Tierney did a follow-up, entitled “The Reign of Recycling.” His overall tone is still pessimistic. Not only is recycling more expensive than simply burying trash, the proposed goal of zero waste would be absurd. He quotes former EPA official J. Winston Porter:

“It makes sense to recycle commercial cardboard and some paper, as well as selected metals and plastics. But other materials rarely make sense, including food waste and other compostables. The zero waste goal makes no sense at all—it’s very expensive with almost no real environmental benefit.”

One way to get beyond fads and purely emotional appeal is to examine specific instances, whereby a particular discarded object is recycled, and turned into another product…

1.     How about using discarded fishing nets (said to comprise 10 percent of marine litter) to make office chairs? Meet The Smart Ocean chair, made with nearly two pounds of recycled fishing nets. Humanscale has teamed up with Bureo, a company that collects discarded fishing nets in Chile, and recycles them into plastic pellets that can be formed into a variety of products. Besides the chairs, Bureo produces skateboards, and a version of the popular game Jenga®.

2.     Moving onto land, many homeowners are familiar with high-density polyethylene (HDPE) lumber, as a wood substitute. This material has found great success in such applications as outdoor furniture and replacing old wood trim in residential exteriors. HDPE is infinitely recyclable, and the raw materials are mostly derived from post-consumer bottle waste, such as milk and detergent bottles, or other post-industrial material.

This material is cleaned by a decontamination process to a high purity level, which removes contaminants such as food residue, paper, and adhesives. It is then compounded into a rigid board stock material.

Finally, fads rarely stand up to logic and right reason. For example, the inherent appeal of wind energy must be examined in light of all the facts—and the debate is intense. Recent experience with large subsidies for alternative energy projects have not been a smashing success. Likewise, political pressure to expand recycling programs to include questionable materials has done little but increase costs.

Wow. There’s a thought: We need less politics and a lot more logic and right reason in our approach to ecology.