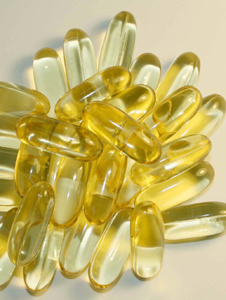 Over the past few years, wonderful results have been published regarding the benefits of fish oil supplementation. This rich and inexpensive source of omega 3 fatty acids is said to tone down your body’s inflammatory response; lower your cholesterol, tryglicerides, LDL, and blood pressure, while at the same time increasing good HDL cholesterol; mitigate the clots that can cause heart attack and stroke; improve brain function; lessen depression and other psychiatric conditions; and seems to be protective against breast, colon, and prostate cancer!

Commercial pharmaceutical preparations have been termed “miracle drugs” with far fewer properties. So, what’s not to like?

Unfortunately, the fear entrepreneurs have seen an opportunity for some publicity, and recently a filed a lawsuit against certain fish oil dietary supplement manufacturers and retailers, based on California’s Proposition 65 standards for polychlorinated biphenyls (PCB).

Andrew Shao, Ph.D., senior vice president, scientific and regulatory affairs for Council for Responsible Nutrition (CRN), the leading trade association representing the dietary supplement industry, was quick to respond: “Fish oil supplements are among the safest, most beneficial health products on the market. Today’s announcement of a lawsuit against companies manufacturing or selling popular products is just that—a lawsuit looking for media attention, not a public safety concern for consumers.”

Moreover, as is becoming all too common in these sorts of actions, the plaintiffs seem to be conflating various provisions of the law in question—No Significant Risk Level (NSRL) and Maximum Allowable Dose Level (MADL). The MADL is associated with chemicals that may cause reproductive toxicity, but such levels have not yet been set for PCBs. According to Adam Ismail, Executive Director of Global Organization for EPA and DHA Omega-3s (GOED), the plaintiffs are asserting that since no regulatory body has set a limit related to reproductive toxicity, the default level should be zero.”

This brings us back to the old chestnut “there is no safe level of (fill in the blank),” a notion that is absurd on its face, because contaminants of all sorts abound in nature—and always have—long before we humans supposedly ruined the otherwise pristine environment. Besides, if this concept were true, then medically therapeutic compounds (whether drugs or herbs), virtually all of which are toxic at high concentration, would still be harmful at proven therapeutic doses. Or, to put it another way, medicines would simply not exist.

There is little doubt that the lawsuit was based on Prop 65, since the PCB standards therein are drastically less than either EPA or FDA numbers. Even then, the actual levels of PCBs found in the majority of the products cited do not appear to exceed the Prop 65 limit of 90 nanograms per day. In addition, cogent details were lacking at the press conference organized by the plaintiffs.

Consumers should be aware that GOED’s standard, known as the GOED Voluntary Monograph, has helped member companies to proactively address quality issues, so consumers can shop with confidence. Indeed, most manufacturers of fish oil supplements have special processes in place to remove contaminants, putting PCBs at far lower levels than would be found if one were to eat the entire fish.

Finally, it is noted that California’s Office of Environmental Health Hazard Assessment (OEHHA), which runs the Prop 65 program, has assigned its lowest priority to the fish oil project, based in part on a lack of need.