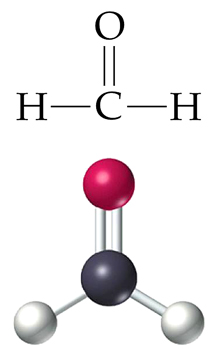 Although we all know what a phobia is, the full definition might provide some additional insight…

phobia:    an exaggerated and often disabling fear usually inexplicable to the subject, having occasionally a logical but usually an illogical or symbolic object, and serving to protect the ego against anxiety arising from unexpressed aggressive impulses   [Webster’s Third New International Dictionary, Unabridged. Merriam-Webster, 2002.]

It started a few months ago with the FEMA trailers. Elevated levels of the chemical were discovered in some of them, and the beleaguered agency found itself mired in another public relations disaster.

The problem is, it’s very difficult to get away from formaldehyde! Look anywhere in your home or workplace—at the wood products, paint, drapery, carpets, paper, and insulation materials—to name just a few items. They all contain formaldehyde, a colorless, pungent-smelling gas that can trigger numerous nasty health effects. Relatively low concentrations of formaldehyde can cause searing eye irritation, skin rashes, and a host of respiratory symptoms.

As to the trailers, the source was very likely excessive outgassing from manufactured wood products—including particleboard and medium density fiberboard—where formaldehyde is an important component in the very adhesives that hold them together. To be sure, since 1984, in accordance with 24 CFR 3280.308 [Manufactured Home Construction and Safety Standards], the Department of Housing and Urban Development (HUD) has promulgated regulations limiting formaldehyde emissions in plywood materials to no more than 0.2 ppm (parts-per-million) and in particleboard materials to no more than 0.3 ppm, when installed in manufactured homes.

Experience has shown that these levels, mixed in the general air of the manufactured home, will normally keep emissions below 0.01 ppm. One can only speculate how, in the rush and crush of the Katrina disaster, non-compliant materials ended up in the trailers.

Since the benzene scare of the late 1970s, regulatory levels for most chemicals are decidedly conservative, with numerous layers of safety factors built in. Moreover, it is often the case that when epidemiological studies are done that compare a cohort with documented exposure to a particular compound versus the “normal” population, morbidity and mortality for the conditions being considered are about the same. No doubt, absent occupational health regulations, the picture would not be quite as rosy.

Sometimes, though, the cool light of reason can become eclipsed by hysteria, especially at the hands of those who would profit—namely plaintiff’s attorneys and media outlets that thrive on sensationalism.

In the wake of FEMA’s troubles, numerous websites appeared promising big money relief from “toxic trailers.” It is well to remember that the regulatory levels are based on a lifetime of exposure, and it is unlikely in the extreme that short-term exposure to formaldehyde could have any lasting effects. But then, over a billion dollars was paid out in judgments regarding silicone breast implants, despite contrary evidence in dozens of technical papers. To add insult to injury, the FDA lifted its ban on the implants some years later.

Of course, the FEMA trailers have been in the news constantly, but a new low was struck when one of the TV networks deliberately misquoted a FEMA official who was warning his employees about entering unoccupied trailers, that had been parked in a lot. This was spun to make it look like the agency thought it was OK for the hapless residents to enter trailers, that FEMA itself was afraid of.

On April 11th, FEMA took the bold step of setting new procurement standards for all future temporary housing units purchased by the agency, including a requirement that each unit must test below 0.016 parts per million (ppm) [16 parts-per-billion]. Supposedly, this number is based on Centers for Disease Control and Prevention (CDC) data that pegs indoor air concentrations of formaldehyde in the range from 10 to 30 parts per billion (ppb).

However, we must note that formaldehyde is a normal component of human metabolism, and there are measurable amounts of formaldehyde in human breath at all times. A paper from 2005 found a median level of 4.3 ppb, with levels detected as high as 73 ppb. Subsequently, a 2008 paper suggests that the technology used in the earlier breath measurements understated the concentrations, and that the median level should be more like 10 ppb.

How prudent is it to set ambient air regulations so close to metabolic levels?

Finally, the blogosphere and conventional media are all atwitter over results presented last week at the American Academy of Neurology Meeting in Chicago. Marc Weisskopf, of the Harvard School of Public Health, reported that formaldehyde exposure correlates with an increased risk of contracting amyotrophic lateral sclerosis (ALS—Lou Gehrig’s disease). Ironically, the researchers were looking for a pesticide/herbicide connection and were unable to find one, so they focused on other compounds.

At best, though, Weisskopf’s findings are premature. They were based on the subjects’ self-assessment of exposure—a notoriously inaccurate method. Beauticians most frequently reported on-the-job formaldehyde exposure (24.6%), followed by pharmacists/morticians/chemists, radiological and lab technicians, doctors and veterinarians, dentists, photographers and printers, and nurses (6.6%). This is a far cry from actual quantitative formaldehyde concentration exposure data.

In addition, this formaldehyde cohort comprised only 2.6% of the total population under study, with small numbers of individuals in several of the occupations examined. Weisskopf did acknowledge these and other limitations of his study. A follow-up effort should be done comparing a cohort of individuals with documented exposures to a reasonable control group before conclusions are drawn.

Just don’t expect the doom profiteers and fearmongers to agree. Meanwhile, the number one preventable cause of morbidity and mortality—obesity—is given scant attention, compared to the media’s preferred scare-of-the-month.