Germs At The Gym

Germs At The Gym 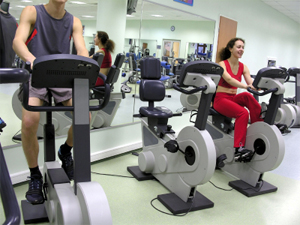 January is the time for New Year’s resolutions, and one of the most popular is to join a gym. Indeed, this is probably the biggest single factor that keeps health clubs in business. In practice, though, the predictable explosion of attendance at most clubs starts to fade by the third week in January, and pretty much disappears by Groundhog Day (February 2nd), when —as the joke goes—most of the resolution crowd returns to their holes.

However, for those who choose to remain, prudence dictates being extra careful regarding microbial contamination.

In January, 2005, Dr. Philip Tierno, Adjunct Associate Professor of Microbiology at NYU Medical School, tested several New York City gyms for germs, and the investigation aired on ABC News: Primetime. Tierno, who gained international recognition as the man who helped solve the mystery behind toxic shock syndrome, came back with some disturbing findings.

Staphylococcus is an infamous toxin producer (toxic shock) and species of the viridans group thrive in the mouth, causing dental caries, and even endocarditis in certain individuals. Diphtheroids are several species of the genus Corynebacteria, and although they do not cause diphtheria (that is caused by Corynebacterium diphtheriae) they can cause all sorts of infections, and some are quite serious. E. coli should need no introduction.

On exercise bikes, he found Candida albicans, known to cause yeast infections, and blamed for hundreds of other symptoms.

Making matters worse, research from the University of Arizona concludes that some cold and flu viruses can survive on surfaces for up to 72 hours, bad news for gym members. And, the fearsome super bug—methicillin-resistant Staphylococcus aureus (MRSA)—formerly found mostly in hospitals—is now a presence in sports facilities.

OK. Now that you’re informed, what can be done? Quite a bit, as it turns out.

A clean gym can save costs and promote good health. The best clubs, which are not necessarily the most expensive or exclusive, disinfect all their equipment and use detail crews to clean everything. Establishing a reputation for cleanliness is certainly a major priority for older clubs, which have to deal with fancy, upstart competitors, most of whom—purely because of the newness of the equipment, and nothing more—have an image of good health.

As always, hand washing is a key component in preventing infection. Many gyms now offer instant hand sanitizers, as well as spray bottles filled with a disinfecting solution and towels, or disposable disinfecting wipes for members to wipe down surfaces and equipment.

According to Jennifer Morcone, spokeswoman for the Centers for Disease Control and Prevention (CDC),

“When it comes to cleaning equipment, nothing fancy is needed. Soap and water or bleach and a little manpower does just fine. You don’t need the antibacterial stuff. Just clean thoroughly and vigorously to clean those pathogens away. Physical activity and eating right makes your immune system stronger and helps fight infections better. Going to the gym is something we want people to do.”

Other things clubs can do include posting signage reminding members to clean equipment after use, and assigning staff to periodically inspect/clean equipment and surfaces in locker rooms throughout the day. Towel laundering should be fastidious, and done with the hottest water, and the highest heat setting on the dryers. Machines should not be overfilled.

Clubs should also avoid letting piles of used towels accumulate, as research has shown that certain microbes can thrive in this environment.

Many members are wary of steam rooms, saunas, and hot tubs, and my personal observations at various gyms would lend credence to their concerns. If you feel the same way, avoid these facilities, or just change clubs.

Finally, don’t be afraid of the gym, but rather be informed and germ-aware. Here’s to a fit and healthy 2007!