House Rules: A Look At the NIOSH Study On Tobacco Smoke Exposure Of Casino Dealers

House Rules:   A Look At the NIOSH Study On Tobacco Smoke Exposure Of Casino Dealers 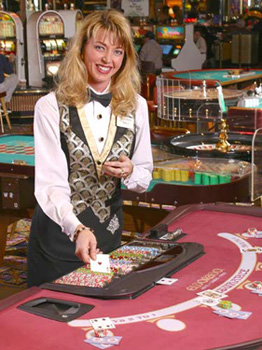 The drive for non-smoking environments has rendered most occupancies smoke-free. One of the few places where you will see plenty of smoking is in casinos. In response to confidential requests from non poker (NP) casino dealers at Bally’s, Paris, and Caesars Palace casinos in Las Vegas for a Health Hazard Evaluation, NIOSH ran a comprehensive study of their work environment.

The dealers wanted to know how the exposure to environmental tobacco smoke (ETS) was affecting their health.

The original requests came in between January and April of 2005. On-site evaluations and screening questionnaires were conducted in July and August of 2005. A final health symptom questionnaire was sent out January of 2006, and biological and environmental monitoring was performed later that month.

A good deal of number crunching and data reduction was done, in preparation for the 48-page report entitled “Environmental and Biological Assessment of Environmental Tobacco Smoke Exposure Among Casino Dealers,” issued just a few days ago. Nine air contaminants indicative of ETS were measured in the environment, and two urinary compounds indicative of ETS components being absorbed into the body were assayed in the dealers.

To be eligible for the study, the dealers had to be non-smokers, who also had a smoke-free environment at home. This status was confirmed by urine tests for cotinine, the major metabolite for nicotine. A control group was comprised of non-smoking casino administrative and engineering employees, whose work environment is smoke-free, and whose homes were also smoke-free.

On the health symptom questionnaire, the NP dealers reported the most common complaints as red or irritated eyes, cough, and stuffy nose. The prevalence of respiratory and eye symptoms, headache, nausea, and dizziness was higher among the dealers than among the administrative and engineering employees, but these differences were not statistically significant.

Symptoms suggestive of work-related asthma were more prevalent among dealers than the other employee group, but the differences were not statistically significant. Seven of eleven dealers who mentioned that they currently have physician-diagnosed asthma said that their asthma was worse when on the job.

Results for the air contaminants in the casino area were consistent with other ETS exposure assessment studies. Notably, all airborne components tested for were below applicable regulatory and occupational exposure limits. Still, we are reminded that synergistic effects can occur, based on exposure to multiple pollutants; and several researchers have found—in related studies—that such effects can include acute bronchitis and asthma.

Besides cotinine, biological monitoring included urinalysis for 4-(Methylnitrosamino)-1-(3-pyridyl)-1-butanol, otherwise known as NNAL, a metabolite of NNK [4-(Methylnitrosamino)-1-(3-pyridyl)-1-butanone]. NNK is a potent pulmonary carcinogen found only in tobacco. It has long been established that the presence of NNAL provides a direct association between tobacco exposure and body burden of a tobacco-related carcinogen.

As cited by NIOSH, the 2006 U.S. Surgeon General’s Report concluded that the presence of NNAL in urine links ETS exposure with an increased risk of lung cancer in nonsmokers, and that exposure to ETS causes lung cancer. However, most of this association was based on animal studies. These generic findings can now be evaluated in light of recent work done by Dr. Jian-Min Yuan of the University of Minnesota, who examined two large cohort studies: the Shanghai Cohort Study which covers 18,244 men, and the Singapore Chinese Health Study, which covers 63,257 men and women.

Presumably, though, there was also a group with some detectable—albeit low—concentration of NNAL that showed no increased risk of lung cancer. Thus, the rather extreme claim in the same Surgeon’s General’s report that “no risk-free level of exposure to ETS exists” can be dismissed, as can all such “no safe level” pronouncements.

NIOSH recommends that the casinos ban smoking, although one wonders just how well that would go over with the patrons.

One interesting finding in the NIOSH report was that the carbon dioxide concentrations (indicative of ventilation efficacy in an occupancy without auto exhaust) were above recommended levels. Could the situation be improved by simply enhancing the ventilation in these facilities?

Predictably, the NIOSH findings are being exaggerated in the news media, but for those casino employees who want a smoke-free workplace, such a comprehensive study will surely help their case.