Journey To The Center Of Obesity

Journey To The Center Of Obesity 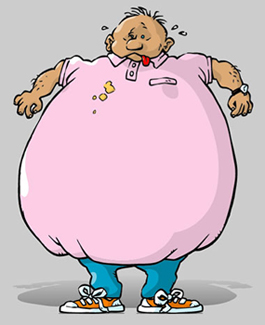 While the media is chock-full of stories telling us how overweight Americans are, there are those of us old enough to remember when there were relatively few fatties overall, and hardly any corpulent kids. Note that this was during an era when almost no one ate healthy. What changed in the last 40 or 50 years?

To get the answer, I interviewed Dr. Margo Wootan, Nutrition Policy Director for Washington-based Center for Science in the Public Interest (CSPI).

We can set a frame of reference on portion size by noting that before you could super-size a meal at McDonald’s, what a typical adult would eat would now qualify as a kid’s meal. Going large at a fast food restaurant is a wonderful deal—for the restaurant. Since most of the cost consists of labor, transportation, and overhead, why not give you a few cents more worth of food for another buck?

Combine this with the historical reality of food scarcity—although it is hardly the case in our country these days—throw in the notion that every good girl and boy cleans their plate, and add to the mix virtually nonstop advertising, what you’re left with is lots of people eating way too much. While the move to big portions may have started outside the home, the concept has been dragged into our homes, as well.

Bear in mind that people get about one-third of their calories eating out, so that what was once a special occasion experience has become commonplace. Yet, most feel that they can order whatever they want when they go out—just like they may have done when it WAS special. As Dr. Wootan noted, “Food is a very inexpensive way to treat yourself.”

You might ask what harm there could be in soft drinks. The problem is that carbonated soft drinks are the biggest single source of calories in the American diet. The Center exposed this rather shocking finding in its publication Liquid Candy:  How Soft Drinks Are Harming Americans’ Health.

If non-carbonated soft drinks are included, teenagers get an incredible 13 percent of their calories from these beverages, with the population as a whole deriving 9 percent. Many kids have told Dr. Wootan that they “don’t like water.” Think about that one for a minute.

A slight glimmer of good news here is that caloric soft drink consumption peaked in 1998, and by 2004 had dropped 7%, with some consumers shifting over to diet sodas (that now comprise about 29% of the market) or the various designer bottled waters.

Technology has certainly eliminated much of what used to be requisite physical activity for children and adults, but there was a time when daily physical education classes were required in most states. Thanks to federally mandated standards of learning whereby expanded curricula have crowded out PE, along with multipurpose rooms where a cafeteria, gym, and auditorium are combined so that facilities are limited, the PE of the past is no more.

Back in the day, this may not have mattered quite as much, since kids tended to be active outside of school hours—a situation that has been diminished considerably with video and computer-based entertainment.

As to food simply being more available now, consider that drug stores now sell more food than drugs. Almost every gas station sells food, along with many electronics stores. Thousands of corporate chain restaurants dot the country, with locations in even the smallest towns, boasting extended hours or not closing at all. And, any grocery store worth its salt now sells a complete variety of prepared foods, ready for take out.

For kids, the Center believes that junk food should be taken out of the schools and that USDA should upgrade its school lunch program nutrition standards. CSPI wants schools to get rid of unhealthy fundraisers, and backs this up with suggestions for good ones on its website. It attacks beverage contracts with soft drink suppliers as being of dubious benefit, bringing in a scant $18 per student per year, and mocks certain label collection programs as forcing the purchase of $2500 worth of soup to obtain a $25 stapler!

For adults, the Center is pushing for nutrition labeling at restaurants, as an essential aid in helping diners make good choices. It is not intuitively obvious, for example, that a tuna salad sandwich would likely have far more calories that one made with roast beef. Remember that nutrition labeling on packaged foods has been the law since 1994, and as one who is usually wary of increased regulation, this idea is a no-brainer. Why should restaurants be exempt from what the rest of the food industry already has to do?

However, it will not be an easy fight, since Governor Schwarzenegger just vetoed a bellwether bill calling for such labeling in California, despite overwhelming poll data that Californians wanted such a provision. Dr. Wootan calls the veto “a giant, greasy stain on the Governor’s health record.”

On the non-regulatory side, CSPI has field-proven community based nutrition education programs to offer as a counter to the multi-billion dollar campaigns of the big food companies.

Some deride the Center as the humorless food police, but I would say that obesity, and its attendant increase in dozens of dangerous conditions—not the least of which are heart disease and diabetes—is no laughing matter. And sometimes, we DO need the police.