Laser Printer Emissions And Your Health

Laser Printer Emissions And Your Health 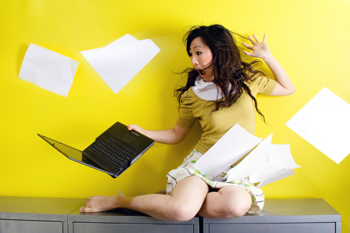 Particulate matter has long been identified as an air pollutant, but up until quite recently, the particles of interest tended to be relatively large, having a diameter of well over 1 micrometer (0.000039 inches). For the most part, so-called ultrafine particles (UFP)—those with a diameter of less than 0.1 micrometer— were overlooked by the majority of investigators as a significant factor in health problems.

But in 1994, Günter Oberdörster, of the University of Rochester, introduced the hypothesis that UFP could cause toxicity to the human respiratory tract. Fast forward to 2007, and now Lidia Morawska et al., of Queensland University of Technology (Brisbane, Australia) have published a study in Environmental Science and Technology, entitled “Particle Emission Characteristics of Office Printers.”

While we appreciate that it is important in the competitive world of academic science for researchers to carve out a niche for themselves, and garner publicity for their works, it is unfortunate that Dr. Morawska felt the need to overhype the significance of her very preliminary results (more on that later) by telling various media outlets that:

Of course, if you actually read the study, about all you can reasonably conclude is that some laser printers give off particulate emissions, and that is not exactly big news. Attempting to read much more into the results is hampered by a few difficulties, however…

While the paper acknowledges that:

“The high standard deviation of the average emission rates estimated in this study also indicates that the particle emission process and the behavior of individual printers are complex and that they are still far from being completely understood.”

This did not prevent the senior author from stating outright that:

“By all means, this is an important indoor source of pollution. There should be regulations.”

HP, a major supplier of the printers, notes in its response to the study that:

Vigorous tests are an integral part of HP’s research and development and its strict quality-control procedures. HP LaserJet printing systems, original HP print cartridges and papers are tested for dust release and possible material emissions and are compliant with all applicable international health and safety requirements. In addition to meeting or exceeding these guidelines, HP’s design criteria for its laser printing systems incorporate guidelines from both the Blue Angel program in Germany and the Greenguard program in the United States.

Predictably, the blogs are already full of shrill posts condemning the evil printer companies, with some expressing fear of coming to work, or of bringing a laser printer into their house.

A far more useful study would have been to compare office workers exposed to laser printer emissions to those who are not, and compile the epidemiological results. If statistically significant findings emerged, THEN one would look at differences in laser printers, and even then ventilation characteristics would most assuredly have to be taken into account.

Until that study is done, I would advise not worrying about your laser printer, but if you are concerned, improve the ventilation of your office.