A Look At Stress In The Workplace 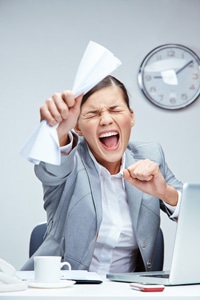 A Look At Stress In The Workplace

I suppose we should start with a definition of “stress,” at least as it applies to organisms. For that, we venture back to the July 4, 1936 issue of Nature, and a letter submitted by endocrinologist Hans Selye (1907-1982) entitled “A Syndrome produced by Diverse Nocuous Agents.” Selye first called it the “General Adaptation Syndrome,” later renaming it “stress response.” This syndrome consists of an enlargement of the adrenal gland; atrophy of the thymus, spleen, and other lymphoid tissue; and gastric ulcerations.

The 1936 letter describes three stages of adaptation, including an initial brief alarm reaction, followed by a prolonged period of resistance, and a terminal stage of exhaustion and death. Interestingly, Selye’s experiments were performed on rats–an early precursor of the rat race. Selye himself was influenced by the work of Harvard physiologist Walter Cannon (1871-1945), who coined the term “fight or flight response.”

Stress triggers the release of epinephrine (aka adrenaline), norepinephrine, and cortisol. This action increases the heart rate, increases oxygen delivery to the brain, dilates blood vessels in skeletal muscles, and raises blood glucose levels. It’s easy enough to understand that chronic stress–whereby such a “hyperdrive” state is being maintained on almost a continuous basis–is bad for your health.

Hyperglycemia and hypertension would be bad enough; but wait, there’s more. Norepinephrine is a neurotransmitter and can alter cognition and other mental processes, leading to poor concentration, mood swings, agitation, depression, and anxiety. Cranking the cortisol will depress immune function, as well as promoting weight gain, especially the accumulation of abdominal fat. Nasty!

Stress in the workplace has been identified as a major source, if not THE major source of stress for American adults. By all reports, it keeps getting worse. Such job stress, often perceived as having little control but beset with endless demands has been associated with increased rates of heart attack, and other disorders.

We can tabulate all sorts of job stressors: The feeling of powerlessness; having salary, pension, benefits, and perks that keep you tied to a job you hate; noise, lack of privacy, poor lighting, poor ventilation, poor temperature control, or inadequate sanitary facilities; and settings where there is organizational confusion, or an overly authoritarian, laissez-faire, or crisis-centered managerial style. And that just scratches the surface.

Australian adman turned author Nigel Marsh was famously quoted on the matter of work-life balance, and the underlying chronic stress (riffing on Thoreau): “The reality of the society that we’re in is there are thousands and thousands of people out there leading lives of quiet, screaming desperation, where they work long, hard hours at jobs they hate to enable them to buy things they don’t need to impress people they don’t like.”

One important subset of workplace stress is the matter of relocation. Surely, there is an emotional–and physical–toll endured by any family going through this process.

According to a 2015 Worldwide ERC US Transfer Volume and Cost Survey, the number one stress involving relocation is “family resistance to the move,” affecting nearly 60% of those surveyed. From the start–even before a relocation happens–the evidence reveals that family unity (or the lack thereof) can be a source of great support or cause for consternation.

“Once a family’s move is complete and everyone has physically settled into their new, respective neighborhood and home, each member of the family will expectedly be battling their own, unique challenges. Maybe the father is struggling to find a new job in his niche field or can’t seem to find a religious group/community that he fits into as well as he did in his previous community. Perhaps his daughter is both adjusting to being a teenager at a new high school and is faced with making new friends while also getting good grades as she prepares for college applications.”

“Meanwhile, the initial family member who prompted the relocation is tasked with building a strong work community in a new office that she is unfamiliar with while also ensuring her family is acclimating well and is happy.”

Any number of strategies are in play to combat stress, including exercise; meditation; sufficient rest; cutting back on alcohol and caffeine; and biofeedback. But for those stresses of relocation, we encourage you to check out the customized tools, resources, and workbooks, offered by Essential Engagement Services.