Missteps At The Lancet: The Andrew Wakefield Travesty…And Others

Missteps At The Lancet: The Andrew Wakefield Travesty…And Others 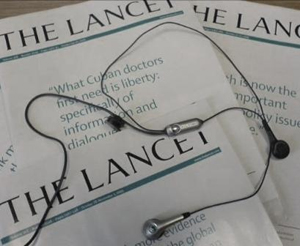 By now, it is well publicized that the infamous study in which autism was linked to MMR inoculations—by Andrew Wakefield et al.—has been “fully retracted” by the editors. Wakefield’s paper was published in the February 28, 1998 issue of the famed British medical journal The Lancet, and was retracted on February 2, 2010.

Perhaps the most provocative citation from the 1998 article was the final paragraph:

We have identified a chronic enterocolitis in children that may be related to neuropsychiatric dysfunction. In most cases, onset of symptoms was after measles, mumps, and rubella immunisation. Further investigations are needed to examine this syndrome and its possible relation to this vaccine.

Not surprisingly, this citation was quickly picked up by desperate parents looking for a reason for their children’s autism, as well as by numerous fear entrepreneurs—including Robert F. Kennedy Jr.—who garnered plenty of media coverage. And, as it turns out, more’s the pity. Evidently, the anti-vaccine hysteria had some traction.

Britain’s child vaccination rates are down to only 70% is some regions, compared to more than 90% in the mid-1990s. Note that 70 percent is well below the herd immunity threshold for the three diseases covered by the MMR vaccine. As such, measles cases skyrocketed. In 1998, there were but 56 cases in all of England and Wales, while 2008’s figure was 1,370. And, in 2006, there was the first child measles fatality in more than ten years.

While it would be very difficult to absolutely prove causality here, the implications are all too clear—ironically far clearer than the assertions in Wakefield’s paper.

In a recent article entitled “Who’ll Apologize to Dead Kids?,” Dr. Elizabeth Whelan—president of the American Council on Science and Health—weighed in on the matter:

Many of us in the scientific community recognized the “study” as junk when it appeared in 1998. Even before we learned of then-unknown ethical failings by its lead author, we knew the study was based on a tiny population of only twelve children. More, it relied on a novel methodology that assumed some bizarre, previously unheard of, association between children’s autism and their manifestation of intestinal problems.

When criticism of the paper intensified in the days after publication, Lancet editor-in-chief Dr. Richard Horton defended his decision to publish what he acknowledged as an inferior study by claiming it would generate debate on the autism/vaccine issue. Even when ten of the original thirteen authors withdrew their names from the article, Horton still refused to withdraw the study.

Nor did he take such action when multiple studies subsequently appeared showing no link between vaccines and autism. Nor even in 2004—when it was revealed that the lead author, Dr. Andrew Wakefield, had been paid, in part, by lawyers for parents seeking to sue vaccine makers, claiming adverse health consequences.

Much of the investigation that finally led to the editorial retraction came from the bravura work of journalist Brian Deer.

“This retraction by The Lancet came far too late. It’s very easy to scare people; it’s very hard to unscare them. Horton has made no effort whatsoever to apologize or take editorial responsibility for this egregious error. He should step forward and say, ‘I regret the needless suffering and death for which I am partly responsible.'”

We now look at other incidents in which The Lancet exercised questionable judgment, or flat-out bias.

Second in notoriety only to the Wakefield matter was the business of war-related deaths in Iraq. The journal published two articles on the topic, one on October 29, 2004, and the other on October 11, 2006. In the first one, the deaths were estimated at 98,000—counted from the 2003 invasion and occupation up to that time. The 2006 survey, though, shocked many with the astonishing figure of 654,965 through the end of June, 2006.

This figure was challenged by many, including the antiwar group Iraq Body Count project, as well as the Iraqi Health Ministry and the United Nations. Moreover, an article published in the January 31, 2008 edition of the New England Journal of Medicine came up with a far lower figure (151,000), and was not exactly polite in its skewering of The Lancet effort (Burnham et al.):

[The Iraq Body Count and the Iraq Family Health Survey] indicate that the 2006 study by Burnham et al. considerably overestimated the number of violent deaths. For instance, to reach the 925 violent deaths per day reported by Burnham et al. for June 2005 through June 2006, as many as 87% of violent deaths would have been missed in the IFHS and more than 90% in the Iraq Body Count. This level of under-reporting is highly improbable, given the internal and external consistency of the data and the much larger sample size and quality-control measures taken in the implementation of the IFHS.

It was widely reported that Burnham et al. refused to release their data to be evaluated by others—thus straining the notion of peer-review touted by The Lancet, and it was revealed that billionaire leftist George Soros was a primary source of funding for the project. More than that, Riyadh Lafta, an author on the paper, has been linked to less than truthful survey work, including much for Saddam Hussein. Of course, the leftist/activist viewpoints of Richard Horton himself are no secret.

Finally, just as Climategate was unfolding, on November 25, 2009, The Lancet launched a series of articles under the heading “Health and Climate Change.” To call the series less than objective is to be kind…

Mixing politics and science is a recipe for disaster as editor-in-chief Horton and company have amply demonstrated, especially in the Wakefield matter. Sadly, he doesn’t seem to realize how much damage he has inflicted on the reputation of his 186-year-old publication.