Is Rugby The Next Big Thing?

Is Rugby The Next Big Thing? 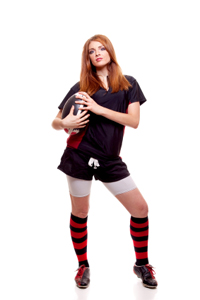 Certainly, there are many positive developments to talk about. Rugby “sevens”—a modification of the more traditional 15-a-side game—will be part of the 2016 Olympics. USA Rugby counts up more than 2,200 pre-teens currently playing, and touts the more than 34,000 on high school programs, nearly 9,000 of whom are girls. Adult programs at various levels are growing rapidly, and there have always been college teams.

Perhaps the biggest breakthrough occurred after the 1995 Rugby World Cup, when this sport—the last bastion of at least apparent amateurism—finally allowed players to be openly compensated. And while the money available may not yet match pro football or pro soccer, athletes who are just shy of NFL-level talent now have another place to go.

From a spectator’s point of view, rugby offers nonstop action and thus cannot bear the endless commercials of American pro football. It is doubtless more exciting to watch than soccer, especially given this year’s effective if soporific performance by Spain to win the World Cup.

I gained more perspective by interviewing Shawn Lipman—South African born rugby player, and former star of the US national team. Shawn also led the US Maccabiah Team at the 1997 and 1993 Maccabiah World Games, and in 2004 was inducted into the Jewish Sports Hall of Fame.

Commenting on the 2010 FIFA (soccer) World Cup, Shawn notes that rugby, already big in France, was given a significant boost, owing to the shockingly weak showing of their national team. He says that such lackluster play by someone wearing a national jersey would be “inconceivable” in rugby. He also contrasts fan behavior between rugby and soccer.

When I played at the 1991 Rugby World Cup at Twickenham Stadium in England, there were only 30 police officers in attendance, for a crowd of around 60,000. Compare that to the army of 3,000 policemen, which would typically be present for a soccer match at nearby (and somewhat larger) Wembley Stadium. And, there has only been one person ejected from Twickenham rugby matches in over 100 years.

Shawn also contrasts the all-around aspect of rugby with the specialization so prevalent in most American youth sports these days.

You’ve got kids playing Pop Warner football, and maybe they’re a right guard. Their job is simply to block, from the age of six or seven. But, put them in a game of rugby. They’ve got to run, they’ve got to tackle, and they can score. So, there’s much more freedom to participate in all the elements of the game. It’s tremendously appealing to the young kids. Plus, you’ve got be in great condition.

One of Shawn’s current projects is distributing the upcoming independent feature “Play On,” a rugby-themed story about Keir, a young professional star from Scotland, who is still living in the shadow of his famous father—a player during the amateur era.

Keir leaves Scotland to pursue his dreams in America, but—to put it mildly—things don’t quite work out as he had planned. You don’t have to be a rugby fan to enjoy this pic, co-written and directed by TV veteran David Story.

Shawn is taking a unique approach in marketing this movie. Rather than using the standard method of making prints and hoping for theatrical distribution, which for an indie project can be disappointing and expensive, Shawn will be relying on a strong viral campaign via the Internet.

In fact, at least initially all views will be streamed online, based on a small fee, which will allow the user access for 48 hours.

When you think about it, this sort of rebel, if gentlemanly approach, seems to fit right in with the image of rugby.