Some Old Wives’ Tales Regarding Health—Unpacked 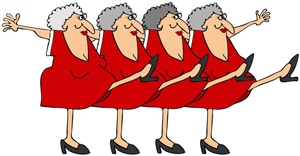 Some Old Wives’ Tales Regarding Health—Unpacked

This week, we will be discussing some reputed old wives’ tales. But first, let’s take a moment to understand the term. By most accounts, the notion of an “old wives’ tale”—if not the exact phrase—dates to dim antiquity, since it describes so-called “oral tradition.” That is, before literacy, or even the means to write things down at all were common, people handed down advice and aphorisms along with the stories they told each other. Stereotypically, older women (aka “wives,” married or not) were big on the advice and aphorisms.

However, many of the precepts they advanced were either disproved by experience, or were simply disliked. Thus, to call something an old wives’ tale is to mock it. As medical science evolved, any number of health-related old wives’ tales would be debunked, with such articles often appearing in the Sunday magazines of major newspapers. Here are a few examples:

1.Feed a cold, starve a fever. What happens if you have both a cold and a fever? Interestingly, though, a fever can mean influenza instead, and there are stories of soldiers fending off the 1918 flu pandemic by fasting.

2.Carrots improve your vision. (I know, few rabbits wear glasses.) Carrots are a good source of beta-carotene, which metabolizes to Vitamin A, essential to eye health. However, if you are one of millions whose visual acuity needs correction, all the carrots in the world won’t get you to 20/20.

3.Allow one hour after eating before swimming, to avoid dangerous cramps. Widely believed, even though it was debunked every single day by kids who violated this admonition. As a child, I had my doubts, but they were all removed the day I had to take a demanding swimming test minutes after lunch—and I passed the test and survived!

In some cases, though, an old wives’ tale will hold up, and this particular one comes to us at just the right time…

Your muscles hurt more in cold weather, owing to rapid heat loss causing tightness and possible loss of range of motion. Tissue damage and increased soreness can follow. Tehrany offers this advice, to help avoid such issues—Warm up for ten minutes when the temperature is between 35 and 45 degrees F (1.7 – 7.2 degrees C). For each 10-degree (5.6 deg C) temperature drop below 35 (1.7 deg C), extend your warm-up by five minutes.

The barometric pressure generally drops in winter (and also when it rains). Under such conditions, certain parts of the body (knees, hips, hands, elbows, and shoulders) can swell—irritating nerves and causing pain. Tehrany cites a study from 2014 entitled “Inverse association between air pressure and Rheumatoid arthritis synovitis,” in which the investigators wanted to confirm such anecdotal reports from patients.

Lead author Chikashi Terao and associates reported, with an abundance of caution, that: “We could not conclude whether air pressure directly influences RA synovitis or if it is just a confounding factor of yet-to-be-determined factors with direct effects on RA synovitis. However, our analysis supports the patients’ subjective feelings of relationship between air pressure and joint synovitis.”

Another factor in play is that colder weather can redirect some blood flow away from the limbs, in favor of the heart and lungs. Thus, warmth is removed from joints, causing discomfort.

At best, even a mostly true old wives’ tale is observational, and given the complexity of human physiology and psychology will likely fail full scientific rigor. But, give credit where it’s due. Real science begins as good observation—and that is a whole lot different from today’s all-too-common methodology of proffering some hypothesis, and looking for “correlations,” using statistical software.