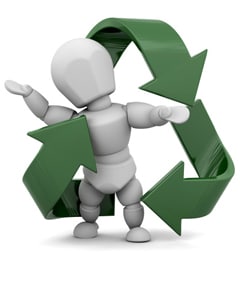 This pithy proverb is said to date back to at least 1576, as “For want is nexte to waste, and shame doeth synne ensue.” By 1721, it was somewhat more understandable as “Willful waste makes woeful want.” Linked to this concept is the notion of waste management.

The drive to recycle was certainly jump-started by the notorious 1987 odyssey of the Mobro 4000 barge, holding 3168 tons of New York City trash. Economically, this made sense. It was cheaper at the time to ship trash from populated states where landfill tipping fees were at a premium out to less populated states where the costs were minimal. Conflicting versions of the story have been published, but for whatever reason, initial commitments to accept the waste in North Carolina would disappear, perhaps for fear of unstated hazardous materials.

Now marked with the scarlet letter, the barge remained at sea for 112 days, until returning to Brooklyn, where the waste was incinerated.

Fears that we were running out of landfill space would pervade the media, kids were being taught unmitigated nonsense in schools to the effect that we would soon strangle in our own garbage, and the interest in recycling was at a fever pitch. Never mind that economist A. Clark Wiseman, and others, contend that at our current rates, Americans could put all of the trash generated over the next 1,000 years into a landfill 100 yards (91.4 m) high and 35 miles (56.3 km) square.

As environmental policy expert Angela Logomasini has pointed out, a proper integrated waste management system “recognizes that some portions of our waste are most efficiently recycled, some are most efficiently placed in landfills, and some should be burned in incinerators. The key is finding the mix of options that conserves the most resources, while protecting the environment.”

It is no secret that trash collection—and waste management in general—is a competitive business, and in some parts of the country has been tainted by organized crime. While the advent of RCRA eliminated the “Wild West” environment of the earlier times, a report issued in December, 2011, by the State of New Jersey Commission of Investigation noted that:

“Individuals banned from the industry here years ago because of ties to organized crime and other criminal activities have nonetheless found ways to conduct lucrative commerce in waste-hauling and recycling. New Jersey has also become a haven for criminally-tainted entrepreneurs who were kicked out of the business as a result of heightened vigilance and stronger rules elsewhere, most notably in neighboring New York.”

Meanwhile, on the other side of the country, San Francisco-based Recology is seemingly no stranger to controversy. Residents of Pacifica, CA complain about their city’s no-bid contract with the company; and similar concerns have been expressed regarding neighboring San Francisco’s contract with the firm. Indeed, that matter is the subject of pending litigation.

Local watchdogs are suggesting that Beverly Hills also examine its relationship with Recology.

Stories abound from all over the country detailing long term trash-hauling contractors being substantially underbid, sometimes at one-third the original price. Even when dealing with trash, Caveat emptor.