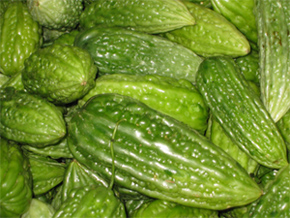 The vegetable bitter melon, (Momordica charantia) a traditional ingredient in Chinese herbal medicine, as well as in other cultures, has demonstrated a variety of therapeutic properties. In vitro studies have shown efficacy against Epstein-Barr, herpes, and HIV pathogens; broad spectrum antibacterial action has been observed; one of its derivatives—momordin—has been effective against Hodgkin’s lymphoma; and extracts have inhibited the growth of mammary tumors in mice.

Various other indications, ranging from hypertension to constipation have been listed for the plant.

Interestingly, bitter melon has also been widely known as a beneficial agent against diabetes mellitus—especially Type 2 diabetes. Dozens of studies attest to the hypoglycemic (blood sugar lowering) properties of this seeming cure-all herb, and now a team of scientists believes that they have unlocked at least this secret of bitter melon. Results were announced in the March 21, 2008 issue of Chemistry & Biology.

In a joint effort between Australia’s Garvan Institute of Medical Research and China’s Shanghai Institute of Material Medica, nearly a ton of bitter melon was pulped, and numerous chemical compounds were isolated. Four compounds in particular, known as cucurbitane glycosides, were identified as “very promising bioactive components.”

It appears that the four compounds switch on an enzyme called AMP-activated protein kinase (AMPK), a key factor in enabling glucose uptake and regulating fatty acid oxidation. As it happens, physical exercise activates AMPK in muscle; that’s why an exercise program is typically recommended to Type 2 diabetes patients.

According to Professor David James, Director of the Diabetes and Obesity Program at Garvan:

“We can now understand at a molecular level why bitter melon works as a treatment for diabetes. By isolating the compounds we believe to be therapeutic, we can investigate how they work together in our cells.”

Sufferers of Type 2 diabetes are unable to process blood sugar properly, usually owing to some combination of “insulin resistance,” whereby their cells are not able to use insulin effectively, and simply not producing enough of the hormone to begin with.

Jiming Ye and Nigel Turner, two other Garvan scientists involved with the project, acknowledge that there are already a number of pharmaceutical drugs that activate AMPK, but side effects are not uncommon. These can include gastrointestinal upset, shortness of breath, rapid weight gain, flu-like symptoms, and rarely a serious condition called lactic acidosis.

“The advantage of bitter melon is that there are no known side effects. Practitioners of Chinese medicine have used it for hundreds of years to good effect.”

The researchers hope that their investigations will lead to a whole new class of therapeutics for diabetes and obesity.

As with any active therapeutic agent, common sense precautions should be taken. Here are some contraindications:

With the incidence of Type 2 diabetes skyrocketing, alternative therapies are certainly more than welcome. Perhaps this work will inspire others to document herbal remedies—for all sorts of conditions—both clinically and in the lab.