Chinese Drywall Houses: What About The People Inside?

Chinese Drywall Houses: What About The People Inside? 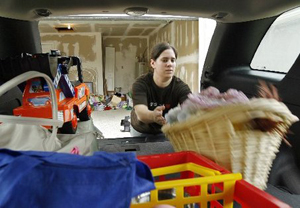 Last week’s story on fixing houses with tainted Chinese drywall generated a fair amount of e-mail. One of the questions raised was the same one I got directly from affected homeowners: Since I’m going to have to pay for all the remediation costs out of my own pocket, are there any other measures I can take—short of demolition, treatment, and reconstruction—that would allow a temporary fix?

Or, as I was also asked: How bad can it get before we really have to vacate the house?

As you can appreciate, there are no definitive answers here. All we can do is suggest best practices, and note that individual situations may vary.

Affected homeowners have discovered that a full turnkey remediation job will cost approximately $35/square foot ($377/square meter). As bad as that seems, remember that many of these homeowners are also “upside down” in their mortgages, and thus do not have sufficient equity in their homes to finance such a project. Now you can see why so many of them are searching for alternatives.

The first point to make is that any measure short of full remediation will not adequately address threats to household equipment, even if they do temporarily alleviate odor and some perceived health issues. Industry experts are currently evaluating air filtration systems and misting treatments, to be employed as stopgap measures.

Household equipment that can be affected by tainted drywall includes…

Corrosion will eventually cause failure in the copper coil units of cooling equipment. Upon failure, the replacement should be either epoxy-coated or aluminum. A faulty air conditioning system will exacerbate the effects of tainted drywall, and as the humidity rises in the house, more mold will grow.

The manner in which tainted drywall affects wiring and breakers is more problematical. As the wire’s insulation and the wire itself are attacked by corrosive compounds, shorts could occur. In theory, a short would trip the breaker, preventing serious consequences. However, the breakers can also be affected by corrosion, and might not trip as expected.

In many homes, the breaker panel is located in the garage, an area that is typically unaffected by tainted drywall. However, in smaller homes and condominiums, the panel is often located right in the house, and could likely be affected by the tainted drywall. Unfortunately, beyond checking for proper breaker performance at a given time, there is no way to assure that a breaker will not soon fail.

GFIs are subject to the same uncertainty, although they can be tested and replaced far easier. Likewise, smoke detectors are simple enough to test. Corrosive gases can certainly affect computers and networking hardware. Regular backups will prevent data loss catastrophes, but backups should be uploaded to, or stored at a remote site.

As to health effects, it is noted that few affected homes have yet been documented to have concentrations of the three major drywall-emitted compounds (hydrogen sulfide, carbonyl sulfide, and acetic acid) at levels known to be harmful to health. But, bear in mind that there is very limited data, and some of this data was taken under less than ideal circumstances.

Moreover, there is little information available in the literature on the effects of low concentrations of these chemicals. Traditionally, efforts have been focused on occupational exposure, and while the levels there are considerably higher, the theory was that you could return home to pristine air, and your body would restore itself. This is now a broken model.

Industry has done an admirable job of cleaning itself up, no doubt in response to regulatory pressure. At the same time, though, fanatical and misguided devotion to energy conservation as the holy grail has resulted in a deterioration of indoor air quality in many homes. Add tainted drywall to the mix, and you have an intolerable situation.

Let us assume for a moment that most affected homes do not have any of the suspect compounds present at levels that could cause known health effects. No one has yet looked into additive or synergistic effects. Furthermore, it is futile to tell someone that “Nothing is wrong, it is all in your mind.” The mind-body connection is massive. If someone thinks he’s sick, he IS sick. There is no difference.

Surely, if a family member is experiencing health effects, and you see these lessen or disappear by living outside the house for several days, then this individual—if not the entire family—should move out. For those caught in the gray area, and this will include most who live in affected homes, more frequent health screening is essential.

Bottom line: The only long-term solution is full remediation, which opens up the very touchy issue of paying for it. In the meantime, a few of us are working with ASTM International, already involved in the tainted drywall issue, to broaden its focus, and coordinate all disciplines: analytical, construction, and government, in a concerted effort to deal with the large problem of tainted Chinese drywall.