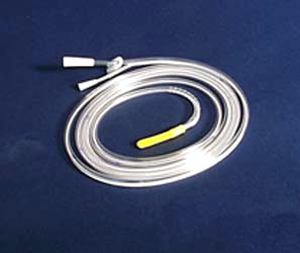 More common than you might think, small bowel obstruction (SBO) accounts for 20% of all acute surgical admissions in the United States. The term SBO is somewhat generic, but refers to any functional or mechanical obstruction of the small intestine.

The major causes of this condition are

Symptoms can vary based on the location of the obstruction, but will likely include abdominal pain, nausea, and digestive upsets. Although techniques to manage SBO have greatly improved over the years, some estimates put the mortality rate at 5%. Still, this looks good compared to the dark ages before 1930, when most of those afflicted with SBO died of their disease.

By the early 1930s, the use of a nasogastric tube was common in treating SBO. A suction device is attached to the tube to aid in drainage of the obstruction. In some cases, this would be successful, but often, surgical intervention would be required, with rather poor outcomes.

It is noted that adhesions—derived from previous surgeries—account for perhaps 60 percent of all cases of SBO, and the sad irony is that many patients are drawn into a vicious cycle of surgery-adhesions-surgery. Thus, if possible, surgery should be avoided.

The original Miller-Abbott long tubes used a mercury-filled balloon, to give weight to the tube, and this was always a potential hazard. Indeed, by 1991, regulations were on the books that significantly limited the use of mercury. And, reports appeared claiming that in some rare cases, the balloons did leak mercury.

No doubt, this played a part in the 1995 declaration by the American College of Surgeons that the old method of using the nasogastric tube (and its 20% success rate) would become the standard of care. Or, to put it another way, in the remaining 80% of cases, surgery would be indicated. This decision was lamented by many experienced surgeons, including Leon Morgenstern, MD, whose CV boasts some 300 publications and more than 180 presentations.

In an article appearing in The American Journal of Surgery entitled “Whatever happened to the long tube?”—published before the declaration was issued—Morgenstern stated: “Finally in desperation, the concept took hold that gastric decompression [nasogastric tube] served the purpose just as well [as the long tube] and with much less trouble for all concerned.”

Surgeon George Gowen, MD, an outspoken proponent of the the long tube, who has published on the matter, told me that…

Two of the three surgeons presenting at the 1995 symposium had been fully informed of the advantages of the long tube prior to the meeting but the long tube was never mentioned. Their biased viewpoint was also presented in the textbook of the American College of Surgeons as well as in The National Surgical Quality Improvement Program.

A newer version of the Miller-Abbott tube, that does not use mercury, has been available for some time from North Carolina-based Andersen Products.

Another non-surgical approach, effective in obstructions caused by adhesions, has been advanced by Clear Passage—a Florida-based physical therapy center. Their entry into treating SBO was based on earlier successes with clearing adhesions in the much smaller fallopian tubes.

As patients and soon-to-be paymasters of nationalized health care, less-invasive options are more welcome than ever before.