Dry Labbing And How It Might Be Affecting You

Dry Labbing And How It Might Be Affecting You 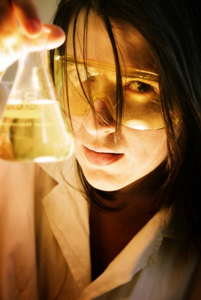 In the most benign sense, a “dry lab” refers to a facility in which computer simulations of scientific hypotheses are performed. This term is in contrast to a “wet lab,” a facility in which equipment and personnel exist to perform hands-on scientific research and experimentation. However, most of the time, “dry lab” is used as a verb, and means that supposed lab data was actually created on paper only, usually to conform to some desired result. In other words, to dry lab is to cheat, plain and simple. As you might expect, there are varying degrees of this practice.

Tired and overworked college science students might be required to turn in lab results which illustrate an already known concept. Surely, it is much easier to fabricate credible numbers than to actually do the wet work. Then again, a researcher could be guilty of dry labbing if he tweaks his lab results to make them look better, in an effort to bolster his theory.

Arguably, the most sinister type of dry labbing would occur when a consumer products testing lab falsifies or simply creates results, to either satisfy the desires of the client; or out of sheer negligence, sloth, or incompetence. In fact, this practice was brought to the public’s attention last month in a Dateline NBC exposé. However, the industry, as well as the media, are sending mixed signals regarding the extent of dry labbing.

James Neal-Kababick, director of Flora Research Laboratories—an Oregon-based natural products research and testing company—noted that the exposé did focus attention on irregularities that have been going on for too long. He added that the broadcast “hurt the image and reputation of the whole industry.” He claims to have seen around 40 reports in the last three years that were questionable. “Most of us know which labs are dry labs or at least horrifically incompetent,” he said. More details would have been nice…

Featured on the Dateline NBC program was Frank L. Jaksch Jr.—Co-Founder and Chief Scientific Officer of ChromaDex Corporation. ChromaDex is a supplier of phytochemical reference standards for the dietary supplements industry, and also provides analytical services. ChromaDex collaborated with Dateline to create two phony supplements, laced with selenium, arsenic, and supposedly Sibutramine, a weight-loss drug taken off the market a few years ago. The idea was to create a sting.

Posing as a new supplement company, Dateline brought samples to Atlas Bioscience Inc. for analysis. Much was made of the fact that Atlas did not find the contaminants, even if these substances are not routinely tested for.

Upon further investigation I discovered that Atlas is a competitor of ChromaDex, and the companies’ principals are not on particularly good terms. Moreover, “kelp” in the sample was purposely doctored and misidentified by Dateline, making proper analysis nearly impossible. There is also some controversy regarding the lab that did correctly identify the contaminants.

In another segment of the same program, though, legitimate concerns were expressed regarding a highly contaminated liquid vitamin product, Total Body Formula, which has been off the market since April 2008, and is the subject of numerous lawsuits.

Questions have been raised regarding the Banned Substances Control Group (BSCG), a Los Angeles-based organization that consults to supplement manufacturers, and arranges for the products to be tested, to ensure that no banned substances (meaning typical sports “juicing” compounds) are present. However, this does not necessarily mean that the product is pure or even safe, and some have suggested that BSCG could be more forthright about this.

In the wake of the Dateline show, and, indeed, long before it aired, there have been calls for better regulation, or at least certification of these labs. After all, certification is required in such fields as environmental testing, medical/clinical analysis, and food safety testing.

Cara Welch, PhD—VP of scientific & regulatory affairs for the Natural Products Association—suggests that “It really is up to the manufacturers to go the extra step and audit not only their suppliers but also the testing facilities. Throw them a false sample every once in a while and see if they catch it. I think that is good practice. We support government and industry actions to both produce dietary supplements according to good manufacturing practices and eliminate drugs wrongly labeled as supplements.”

Of course, all the auditing and certification in the world will not stop anyone determined to commit fraud. Even in the heavily regulated pharmaceutical drug industry, tainted product has occasionally surfaced. Bear in mind that an absolutely perfect product analysis does not prevent a manufacturer from making outrageous claims regarding the efficacy of a supplement. That being said, the supplement industry would be well advised to better police itself, or face the prospect of much more onerous federal regulation.