Fear, Empowerment, And Health Care–With An Eye Toward Women

Fear, Empowerment, And Health Care—With An Eye Toward Women 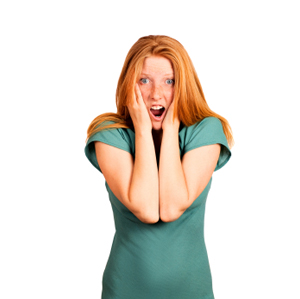 Love and fear are often presented as exceptional motivators, but which one is the greatest? From a theological viewpoint, the answer is love: “There is no fear in love, but perfect love drives out fear because fear has to do with punishment, and so one who fears is not yet perfect in love.” (1 John 4:18)

Fair enough, but on the way to perfection, it’s virtually impossible for us to ignore our fears, especially if the punishment involved will affect our health. Thus, we are assaulted—on a daily basis—by all sorts of health scares. No doubt, these scare motivators are portrayed as being for “our own good,” but some of us question such altruism.

While a few of the scares will simply encourage us to give things up (an extra helping, dessert, smoking, drinking, and illegal drug use), most of them direct us to acquire products and services. I refer, of course, to such items as pharmaceutical drugs, diagnostic procedures, visits to the doctor, health club memberships, diet books, and exercise equipment and apparel.

Yet, fear of death—itself—is not an effective long-term motivator. According to Dr. Dean Ornish…

It’s too scary. We all know we’re going to die one day—the mortality rate is still 100 percent, one per person—but who wants to think about it? Even someone who has had a heart attack usually changes for only a few weeks before he goes back to his old patterns of living and eating. For the same reasons, talking about “prevention” or “risk factor reduction” is boring to most people. Telling people that they’re going to live to be 86 instead of 85 is not very motivating—even when they’re 85—for who wants to live longer if they’re not enjoying life?

Good question. Ornish insists that this is a false dichotomy: It really is possible to do both. In other words—Empowerment! If you detect a bit of skepticism here, it derives from more than Ornish’s foolish advocacy of a 70% carb/low-fat diet, but I digress.

In all likelihood, the term “empowerment” is most often identified with women. The trouble is, regarding health care, female empowerment is too frequently linked with fear. Or, as Dana Loesch tweeted last December: [V]ictimization is the new “empowered.”

True to Ornish’s contention that fear of death is not the prime motivator…Even though female deaths from breast cancer pale in comparison to those from lung cancer, and even though heart disease is still the biggest lady-killer of all, there is little doubt that breast cancer is the most publicized women’s disease. The factor in play here, of course, is fear of disfigurement via mastectomy.

Ramping down a bit, we could also focus on the myriad drugs and treatments primarily intended to improve a woman’s appearance or mitigate the effects of aging. And, let’s not forget the vicarious fear imposed on a mother, wife, or caregiver. It is a standard technique for a doctor to appeal to a woman in one of these three roles, if a treatment recommendation is rebuffed by the patient.

Indeed, according to the US Department of Labor, “Working women are likely to be the primary decision maker for the family as well as the caregiver when a family member falls ill. Therefore, women need adequate knowledge and tools to satisfy their multiple roles as decision makers and consumers of health care.”

In light of this, health care marketeers must plot their strategies. Check out these two snippets, culled from insider marketing blogs…

Women relate through relationships and stories. An example framed in a story is a powerful tactic..online or offline. Of course include the medical information but make it easy to understand…without talking down.

Women’s people-first orientation results in their seeing life problems and buying solutions in terms of how they impact people, and the facts and features are only secondary

But, let’s end on a more positive note. I recently discovered The Innovation Effect, a company founded in 2012 by Norwegian entrepreneur Annette Fosaas. Annette’s flagship product is an iPad app, described as a creative coaching tool, designed to “bring you the most inspirational and creative content that will help you to optimize your performance to innovate and lead change—at home, at work and at school.” Watch Annette’s video.

All things considered, I’d have to agree with St. John. I do prefer love to fear.