A Look At Dietary Supplements

A Look At Dietary Supplements 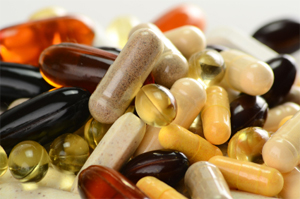 According to the Nutrition Business Journal, The U.S. supplement industry posted 4.4% growth in 2010 to reach $28.1 billion in consumer sales. 34% of this amount was in vitamins, 18% was in herbs and botanicals, and 8% was in minerals. Further data indicate that the top ten best-selling supplements in that year were:

Various surveys reveal that people take supplements to lose weight, stay healthy, and avoid the use of prescription drugs. Yet, it has always been difficult to obtain definitive information on the benefits of supplements, since the use of such non-pharmaceutical products is contrary to the mainstream health care industry.

After all, most of these products are not proprietary, nor do they require a prescription. Thus, advice such as this, taken from Consumer Reports, is dubious…

If a site makes product claims that sound too good to be true, and provides information that is not written or reviewed by qualified health professionals, experts in the field, academia, government, or the medical community, it is unlikely to be a reliable source.

What, exactly, is “too good to be true”? Would it have been too good be true in 1955 that a mere injection would protect people from the scourge of polio? How about antibiotics and insulin? Indeed, any technologically disruptive therapy would virtually by definition be too good to be true, wouldn’t it? And, such therapies, upon their first release, would likely be heavily criticized by contemporary experts.

One wonders, as well, what constitutes a “reliable source.” A substantial number of articles in so-called scientific journals represent little more than data dredging, and attempts to create correlations that are usually more sensationalistic than significant. A recent example is a study published on January 9th in Archives of Internal Medicine, entitled “Statin Use and Risk of Diabetes Mellitus in Postmenopausal Women in the Women’s Health Initiative.”

As summarized in the popular media, postmenopausal women taking statins had an almost 50% increased risk of diabetes compared to women not taking statins. That sounds impressive until you read further (in some accounts) to discover the true numbers: 6.4% of women who didn’t use statins developed type 2 diabetes during the eight to nine years of follow-up. That rate rose to 9.9% among statin users. In other words, of the total number of woman studied (153,840), an additional 3.5% of them developed type 2 diabetes.

Bear in mind that all of these diabetics are self-reported, with no verification. Moreover, even the most ardent supporters of the “diabetes epidemic” will concede that people can go undiagnosed for years, since there may be no symptoms at all. Thus, how smart is it to rely on self-assessment, especially if such a grandiose conclusion is to be garnered? The plain truth is that the measly 3.5 percent difference is less than the experimental error!

We might also ask why these women are taking statins, given their de minimis benefits for all but people who already have heart conditions, as well as their well-known side effects (besides this diabetes connection). Should we also re-open the matter of how the cholesterol theory of heart disease has been disproven time and again, but “reliable sources” don’t seem to care?

And, finally, what is the takeaway from this study if you are a true believer? Should you stop taking your statins and supposedly increase your risk of heart disease, or should you continue to take them and risk diabetes, when both risks are actually minimal?

Consider also the typical study which debunks the use of supplements. In nearly all cases, people with a particular condition are examined for a short period of time, and are given far less than the accepted therapeutic doses. A conclusion is invariably reached that the supplement is ineffective, and might even be harmful, although it is getting more difficult to suppress positive results for such items as Vitamin D and fish oil.

Notwithstanding the small sample size, most people will determine the efficacy of supplements—or prescription drugs for that matter—based on how well they work on themselves, rather than their average effect on a large population. And that only stands to reason.

An expanding segment of the supplement business is combination products. These became popular in the 1990s, with such duos as echinacea/goldenseal, and calcium/vitamin D. A new combination product grabbing media attention is InvigorateNOW™, developed by company CEO Sayan Sarkar, based on what worked for him.

Sarkar emphasizes these elements in his product…

Both Sarkar and Basil Joy, Director of Marketing and Creative Development, are excited about the unique promotion for InvigorateNOW™:

For each bottle purchased, the company donates over 40% of profits towards a reputable charity that performs eyesight-saving surgery. Funds are targeted to eliminate trachoma as a cause of blindness in developing countries. Donations from each bottle will cover most, if not all, costs of saving one person’s eyesight.