The Nanny State Weighs In On School Lunches

The Nanny State Weighs In On School Lunches 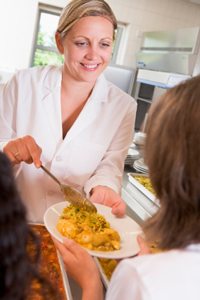 Don’t feel too bad if you missed Press Release No. 0632.10, issued on December 2, 2010 by Agriculture Secretary Tom Vilsack. This communication heralded the passage of the Healthy Hunger-Free Kids Act. Included among Vilsack’s effusive remarks…

This is an historic victory for our nation’s youngsters. This legislation will allow USDA, for the first time in over 30 years, the chance to make real reforms to the school lunch and breakfast programs by improving the critical nutrition and hunger safety net for millions of children.

But, as you may heard recently, that’s not exactly how it’s working out. Since the new guidelines provide for veggies to be the main course, along with severe calorie restrictions, and a massive increase in paperwork, school kids and cafeteria personnel alike are up in arms. As one longtime school nutrition expert remarked, “It’s completely flip-flopped in terms of portion size. I’m appalled at the serving sizes we’re required to give high school students.”

Bear in mind that one of the purposes of the School Lunch Program is to act as a nutrition safety net, for at-risk kids. Yet, as we were told, “[W]e can’t serve seconds, and we can’t save leftover food for the next day. We must throw it away. What a waste for hungry kids who aren’t getting enough to eat to begin with.” The hungry kids include young student-athletes, whose caloric requirements will obviously exceed the mandated maximums for school lunches: 650 calories for elementary school, 700 for middle school, and 850 for high school.

Listen to Representative Steve King (R-IA), who is calling for a repeal to this nonsense: “The misguided nanny state, as advanced by Michelle Obama’s ‘Healthy Hunger-Free Kids Act,’ was interpreted by Secretary Vilsack to be a directive that, because some kids are overweight, he would put every child on a diet. Parents know that their kids deserve all of the healthy and nutritious food they want.”

One of the eminently predictable consequences of this foolish autocratic overreach—although it will surely be termed “unintended”—is that many kids will simply opt to bring their own calorie-packed sack lunch, and those who attend open campus schools will feast on nearby fast food. Full marks if you see the similarity to the low-flush (“water-saving”) toilets, which promote flushing twice.

Many commentators are mentioning the seething hypocrisy in all of this. How many more instances of upper and upper middle class values being imposed on poor people do we need? And, it must be said, that the far-from-svelte First Lady might want to take a long look in the mirror before appointing herself the spokesperson for healthy eating. Moreover, her own daughters, ensconced at tony Sidwell Friends private school, can choose a Caesar salad (complete with evil cheese), and gut-busting pepperoni flatbread pizza.

As blogger Jeannie DeAngelis puts it, “Just as in most dictatorships, the elites remain unaffected by the very government impositions they inflict on everybody else.”

But it gets even worse. Based on the current PC dicta, we must avoid telling a fat person that they are fat. As such, overweight kids are ostracized a whole lot less than they were in the past. Back when I was a child, virtually everything we ate was junk food, and yet there were precious few fat kids. Maybe the fact that they were teased resulted in some quick behavior modification.

The official explanation for our epidemic of obesity scrupulously avoids any mention of this, and instead repeats, ad nauseam, that food is more available now than it was in the past, and that portions were smaller back in the day. As with much conventional wisdom, there is a grain of truth here, but only a grain. Given the vast expansion of chain retail stores and mini-malls, the number of outlets for obtaining food has increased. But even in the 1950s, most urban areas featured a mom and pop snack shop, confectionery, or grocery within walking distance.

Likewise, portion sizes were smaller, but what about a second helping? Baby Boomers were always admonished to clean their plates, because of the starving children overseas. I never did understand how my overeating would help starving children, but that’s a topic for another day.

Finally, as has been well-established by nutritionist Diane Kress, a significant number of today’s kids either have, or are headed toward metabolic syndrome, and their insulin-related issues will cause them to overeat.

Excess insulin release will allow excess glucose to enter fat cells, and circulating blood sugar will drop lower than is normal. The brain will sense this unusual drop in blood sugar after a meal and trigger the desire to consume the one food that will quickly enable a rise in blood sugar…carbohydrate. Children with insulin imbalance will crave chips, pretzels, soda, crackers, ice cream, cookies—even bread, not long after eating a complete meal. These kids are not emotionally eating, they are physiologically eating and they need help.

It’s called carb addiction, and going low-carb is part of the cure. Funny how the USDA still favors a high-carb diet. But don’t worry. Our First Lady will just starve those kids straight.