Skid Row: Where Do Old Tires Go to Die?

Skid Row: Where Do Old Tires Go to Die? 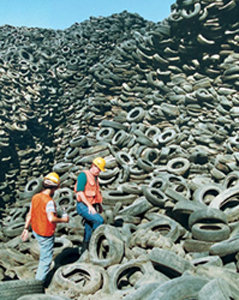 Burning rubber may be a quaint colloquial expression, but when it comes to disposing of used tires, there is hardly anything innocuous about the term. Aside from its political context, which seems to be an almost obligatory form of protest in certain troubled parts of the world, the uncontrolled burning of tires is dangerous, environmentally destructive, and a health hazard.

Today’s tires are largely synthetic, and improper burning can release various carcinogenic compounds such as styrene and butadiene. The characteristic thick black smoke observed when tires are burned outdoors is due to the presence of so-called aromatic extender oils, that would require a much higher temperature to properly combust.

So, what can we do—in an eco-friendly way—with the nearly 300 million scrap tires generated every year in the US?

The good news is that markets now exist for around 80% of these scrap tires, compared to just 17% in 1990. According to the Rubber Manufacturers Association, and based on figures for 2003, 290 million scrap tires were generated, with the marketplace consuming 233 million of them.

Of the 290 million scrap tires–

Another 16.5 million scrap tires were retreaded. Note that using modern retreads is not only safe, it saves money, and is one of the most Green things an individual can do to combat the waste tire problem. It takes far less oil to retread a tire, than to manufacture a new one, and being reborn as a retread is a far better fate for a tire, than to end up helping mosquitoes breed in a landfill or monofill (a special landfill for just one type of waste).

You should know that the old story blaming the frequently seen pieces of rubber littering the highways on cast-off pieces of retreaded tires is nothing more than a huge myth. In 2000, the State of Virginia commissioned a study to help in the creation of more rigorous standards for truck tire retreaders. The study revealed that tire shredding and disintegration occurred as a result of overheating due to underinflation or excessive loads. It didn’t matter if the tire was retreaded or not.

As a result, the state abandoned creating new standards, and instead recommended that more state vehicles use retreads!

Remember that we said the “uncontrolled” burning of tires is bad news? But then you noticed that the biggest application of scrap tires is as a fuel. What gives?

It turns out that using tires as fuel offers several advantages:

How about this endorsement from no less than the US Environmental Protection Agency (EPA):

Based on over 15 years of experience with more than 80 individual facilities, EPA recognizes that the use of tire-derived fuels is a viable alternative to the use of fossil fuels. Facilities that are burning rubber as fuel now include cement kilns, pulp and paper mills, electric utilities, industrial/institutional boilers, and dedicated tire-to-energy plants.

As to the dedicated tire-to-energy facilities, the most successful is Exeter Energy Limited in Sterling, Connecticut, consuming 10 million tires per year. This facility serves as a major scrap tire market for scrap tires in New York and northern New Jersey.

Even though dedicated tire-to-energy facilities have been demonstrated to achieve emission rates much lower than most solid fuel combustors, harsh reaction from ill-informed environmental groups, along with regulatory and energy pricing issues, have slowed the growth of this particular sector of the tires as fuel market. Still, industry officials expect it to bounce back in the next few years.

Hopefully, images of mountains of stockpiled used tires will soon be a not-so-nostalgic bit of the past.