The Sting Of Disappearing Bees

The Sting Of Disappearing Bees 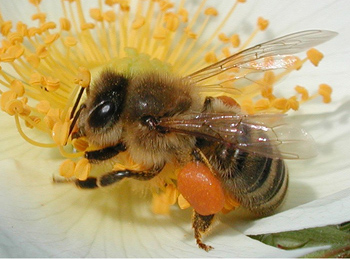 If you’re looking for a current ecological issue with catastrophic implications, that are far more tangible than the dubious predictions of global warming models, then you should get up to speed on Colony Collapse Disorder. The colonies collapsing are those of the familiar honey bee Apis mellifera.

And, why should this concern you? Listen to the words of Albert Einstein—a scientist of some repute:

“If the bee disappeared off the surface of the globe, then man would only have four years of life left. No more bees, no more pollination, no more plants, no more animals, no more man.”

Putting some numbers on this, honey bees are essential for the pollination of more than 90 fruit and vegetable crops worldwide, as well as many native non-agricultural plants. Conservative estimates put the economic worth of the honey bee at greater than $14.6 billion in the U.S. alone.

While it is not uncommon for commercial hives to suffer losses, CCD seems to be unique in the way it can quickly devastate bee populations. The first official reports of CCD came from commercial migratory beekeepers in November, 2006, and it was initially thought that the scourge was limited to the migrants.

The explosion of growth in the migratory industry was spawned by the relatively recent flood of cheap imported honey from China and Argentina. Beekeepers now make far more money by renting their colonies out for pollination, than by selling honey.

But once research started into CCD, it was soon determined that the affliction was not limited to the migrants. Indeed, CCD is a serious problem facing all beekeepers, and here are some of the more important symptoms:

Another striking finding is that individual bees in CCD-affected populations are infected with all sorts of pathogens, including the near-certain presence of certain fungi, leading several authorities to conclude that the affected bees are all immunosuppressed. In effect, then, we could be seeing AIDS in bees.

The extent of CCD is vast and frightening. There are reports of the mysterious disappearance of entire hives in countries including the United States, Spain, Italy, Poland, Greece, Portugal, and France. Some beekeepers in America has lost up to 95 percent of their bees, while commercial beekeepers in 22 states have reported the loss of tens of thousands. An apiarist at Mississippi State University reported that one beekeeper he knew lost nearly 1,000 of his 1,200 colonies. A beekeeper in Missouri reported the loss of 596 of his 700 colonies. And in Ohio, a longtime beekeeping operation reported 700 of its 800 colonies had been decimated.

In one generation alone, U.S. beekeepers have gone from losing 5 percent of their hives each year to 25 percent each winter.

Several causes for CCD have been proposed, including genetically modified crops, a new virus, pesticides, and even cell phone towers. Current research is looking into such areas as:

It is likely that rather than an etiology based on a single “smoking gun,” CCD’s origin will turn out to be a synergistic effect of many contributing factors. Indeed, a serious decline in honey bee population was observed in France in the 1990’s, and was blamed on a powerful insecticide, Gaucho, that interfered with the navigational system in aphids, and apparently also affected bees.

Gaucho was banned in 1999, but bee populations there are still down, and subsequent studies never proved a conclusive link between the chemical and declining bee populations.

Even if the usual enviro doomsayers have not yet jumped on this issue, that’s no reason not to start the buzz about this truly serious situation.