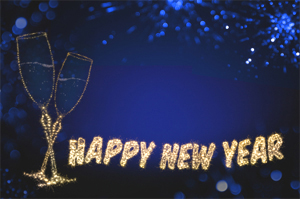 History records that the earliest New Year’s celebrations occurred around 2000 BC in Mesopotamia. Even then, one suspects that resolutions were made, and the goals would likely have been to rid oneself of bad habits, and to adopt better ones—just as they are now.

These all seem like worthy objectives, but I can’t help noticing a bit of irony here. If one were to apply the fifth resolution, the entire concept self-destructs. That is, in pursuit of worthy objectives, why wait? Other than a new number appearing on the calendar, we will note nothing particularly remarkable about January 1st.

Remember January 1, 2000? (Or, if you insist, January 1, 2001.) No new year any of us will ever experience could be more momentous than the turn of the millennium. Yet, after all the Y2K nonsense subsided, it was just another day.

Dr. Philip Golinsky, northern Virginia chiropractor, body builder, and health enthusiast puts it rather bluntly: “New Year’s resolutions are made by people who rarely commit. We see it every year at the gym. The place is chock full for the first few weeks in January—every year. But by the beginning of February, it always goes back to normal.”

I would add that the joke around my health club is that by Groundhog Day (February 2nd), the resolution crowd disappears, and goes back into their hole. Not surprisingly, dropping out early in the year applies to resolutions to lose weight, as well.

I spoke with Juli Novotny, CEO of San Diego-based Kookie Karma, purveyor of handmade vegan and gluten-free snacks. To say the least, these raw and holistic products are healthy. Juli is also an expert on how to eat sensibly during the holidays, and provides helpful suggestions on her blog.

She confirms our resolution phenomenon. “Our company does its best business in January and February because we have the healthier stuff. Many people are on diets, and during those months, our products just fly off the shelves.”

University of Toronto psychologist Janet Polivy published a paper in 2001 entitled “The false hope syndrome: unrealistic expectations of self-change.” She argues that this syndrome is in many respects a problem of overconfidence combined with unrealistic expectations, including the amount of change desired or expected; the speed with which the change will be accomplished; the ease of accomplishing the change; and the effects of the change on other aspects of one’s life.

People often believe that the attribute they change will produce more radical alterations in their lives than can rationally be expected. I’ve had patients who believed that if they could lose weight they would, almost automatically, get a job promotion or a boyfriend.

In order to replace false hopes with real hope, we must learn to determine accurately the difficulty of self-change, to establish realistic goals, to keep our expectations reasonable, and to develop coping skills to help us to contend with the setbacks that normally accompany efforts to change. Real hope of changing requires that our skills match our goals—our goals may thus need to become more appropriate in order for us to accomplish them.

And once your skills match your goals, go for it! No need to wait for January 1st.