Thinking Way Outside The Box, With Scott Tyson

Thinking Way Outside The Box, With Scott Tyson 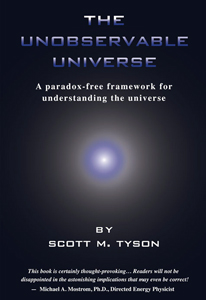 A few days ago, I had a conversation with physicist, problem-solver, big picture futurist, and author of The Unobservable Universe Scott M. Tyson. During our wide-ranging discussions, I was reminded of this passage from 1872 by Lewis Carroll…

“The time has come,” the Walrus said,
“To talk of many things:
Of shoes–and ships–and sealing-wax–
Of cabbages–and kings–
And why the sea is boiling hot–
And whether pigs have wings.”

While none of the Walrus’ topics were covered, we did explore the implications of one of Tyson’s pet peeves: How scientific development is stymied by empirically unfounded assumptions combined with flawed and incomplete scientific interpretations, which scientists continue to inadvertently embrace as scientific truth.

“Our world is at a crucial crossroads and in a deeply precarious situation in which the prospect for preserving or improving the quality of life on earth is now questionable. The path to a better, more secure future might literally be right under our noses,” Tyson says.

He continues, “But the scientists who could lead us away from fossil-fuel and nuclear-based energy production schemes to a new, clean, cheap, bountiful and benign energy production scheme are hamstrung within rigid institutional agendas and doctrines that prevent, at least in part, such goals from being achieved. Continuing to invest billions won’t move us forward unless we also rethink a scientific culture that has lost its ability, interest, and motivation to produce world changing results.”

Regular readers of this column might recognize that these sentiments mirror many of my own, as applied to our failing health care system.

Tyson believes that only with a huge paradigm shift can we resolve the incompatibilities between the Special Theory of Relativity and Quantum Mechanics, as well as finally be able to understand and harness the power of gravity. Note that even with our incomplete understanding of Relativity and Quantum Physics, these theories still led to such current essentials as microelectronics, flat panel displays, LEDs, GPS products, MRI machines, microwave ovens, radar, and atomic clocks, to name only a scant few.

Harnessing the power of gravity has awesome implications. Consider a source of energy that is essentially unlimited, and produces no pollution. Imagine how our lives would change—in nearly every aspect—if we no longer had to worry about energy. Since manufacturers of all products must currently factor energy into the costs of fabrication, and thus trade-offs must be made, imagine how much better and cheaper products could be fashioned if this were not an issue.

This is not as far-fetched as it may first sound. For one thing, gravity is not at all well understood, beyond the obvious Newton/apple ramifications. Just what is this strange force that can act across countless light years of space? And, while we’re at it, what about this so-called “vast nothingness”?

It’s vast, all right, and not just across outer space. Consider a typical carbon atom. There are six electrons, six protons, and six neutrons (the protons and neutrons themselves comprised of quarks and gluons). We’ve been taught that the rest of the atom is, well, “nothing.” In fact, if you look at the ratio of the radius of this “nothing”—or void, as Tyson prefers to call it—to the combined radii of all the particles, you get the astonishing number of one quadrillion. That’s 1 followed by 15 zeroes.

Thus, there is a quadrillion times more void than there is matter in the atom! Is it logical that so much of the universe is nothing? Tyson does not think so. Moreover, he believes that there is an almost infinite amount of potential energy caught up in that void, and within that void lies the secret of gravity. If that weren’t enough, he also maintains that mass is not a property of matter (which in fact has never been proven). Rather, it is a property of the void.

The reason people believe that the void is nothingness is that it is not observable. Hence the book’s title The Unobservable Universe.

So what would unlimited pollution free energy bring to health care? To start, any illnesses caused by pollution derived from energy production (the major source) would be eliminated. By the same token, energy barriers to improper sanitation and food production would disappear. In addition, drug discovery and manufacturing would be streamlined and become much cheaper. Arguably, much stress—thought by many to be a prime cause of illness—would be eliminated, in that unlimited clean energy would make everyone’s life so much easier.

How far into the future are these developments? Even Tyson opines that two generations of scientists may have to die off before the paradigm can really shift. But then again, maybe not. One thing is certain: We’ll never solve today’s big problems with today’s conventional thinking.