What If You’re A Skinny Type 2 Diabetic?

What If You’re A Skinny Type 2 Diabetic? 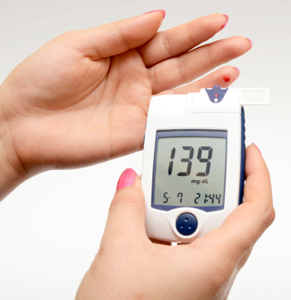 It is estimated that 80 percent of type 2 diabetics are overweight. It’s not clear who came up with this figure, or–more importantly—how it was determined. Perhaps it is tied in with modern medicine’s love for cataloging risk factors, especially simplistic ones. Cynics might go even further, suggesting that risk factors do a much better job of selling drugs than preventing diseases, but we digress.

Another problem with risk factors is that they tend to skew results. Since everyone “knows” that an overweight individual is more likely to have type 2, he would be more likely to have his blood sugar tested than his skinny counterpart. Since there are usually few symptoms for at least mild type 2, no one knows how many undiagnosed skinny type 2’s there really are.

Moreover, the method of diagnosis—and its permanence on your record—are also controversial. According to the National Institute of Diabetes and Digestive and Kidney Diseases (NIDDK):

The fasting blood glucose test is the preferred test for diagnosing diabetes in children and non-pregnant adults. A blood glucose level of 126 milligrams per deciliter [6.99 millimoles per liter] or higher after an 8-hour fast, if repeated on a different day, is a definitive diagnosis.

As any type 2 will tell you, once diagnosed, even if you can show normal readings afterwards, you will be considered diabetic for the rest of your life (this rule is sometimes waived for obese children who get down to normal weight). The problem is that stress, among other things, can raise the fasting blood glucose level 30 points or more. How many so-called type 2’s were under stress when tested? I don’t know, and neither does anyone else.

Some years ago, I corresponded with a man (never obese) who runs a website—very popular with newly-diagnosed type 2’s—in which he explains how he was able to get himself off meds and down to fasting blood glucose readings under 80 mg/dL [4.44 mmol/L]. He describes being rushed to the emergency room with numbers in excess of 500 mg/dL [27.75 mmol/L], and coming home with a “grocery bag full of meds.” However, by controlling his diet (extensively documented on his website), a diet that is not low-carb or special in any way, he cured himself.

Assuming there is any truth to this story, it only makes sense if his elevated blood glucose were temporary, and was caused by some factor other than diabetes. In other words, he was misdiagnosed. I suggest that he is not alone.

While we can surely nitpick about the veracity of the 80 percent figure, suffice to say that skinny type 2’s are considered outliers, and are hard-pressed to obtain information suitable to their particular circumstances. After all, if the most common advice for a type 2 is to lose weight, how would that relate to him?

Making matters worse is the endless stream of information—often contradictory—on how to control or even defeat type 2 diabetes. While much of this confusing content comes from sketchy “alternative” websites, there is no shortage of questionable findings from mainstream scientific journals.

A widely-publicized article entitled “Association of Weight Status With Mortality in Adults With Incident Diabetes” appeared last August in the Journal of the American Medical Association. The “man bites dog” conclusion, based on meta-analysis of several large studies, was that normal weight type 2’s had higher mortality than adults who are overweight or obese.

After the researchers adjusted the data to control for factors such as waist circumference, smoking status, demographic factors, and blood pressure and cholesterol levels, they found that people who were normal weight when diagnosed with type 2 diabetes had more than twice the risk of dying from heart disease than their overweight counterparts. They also had a 2.32 times higher risk of dying from any other cause compared to their overweight peers.

Deconstructing the methodology behind this paper would fill a book, but consider the following:

1.    Many of the subjects in the studies were on prescription drugs, likely multiple drugs replete with untold side effects, yet there was no attempt to compensate for this.

2.    Although alluded to in the article, not enough was made of the very real possibility that the skinny type 2’s at time of diagnosis were more sick than their obese brethren, owing to the lack of obvious symptoms and medical stereotypes.

3.    The BMI (body mass index) as used in the article does not elucidate how the body weight is composed of muscle versus fat. Indeed, many outwardly thin people carry more fat than muscle, making them trim on the outside, but fat on the inside. Such individuals may harbor an excess of visceral fat, which can hamper insulin’s ability to break down sugar.

4.    The extraordinary findings (twice the mortality rate) should have prompted far more than the self-serving “Comment” portion of the article. Remember, the public is bombarded on a weekly basis with health findings that are just barely statistically significant. Now comes a pooled longitudinal study showing twice the mortality? Really.

So, what’s the answer for skinny type 2’s? Being one myself, I wish I knew. Beyond exercising and keeping low carb, I’m on a quest—just like the rest of our overlooked cohort.